The second Project’s Steering Committee Meeting was hold by Skype on 5th June. The University of Seville –USE- hosted it. The following participants were involved in the meeting: M.J. Prados as coordinator and also R. Garcia as University-based administrator (USE); A. Delicado (ICSUL); E. Loukogeorgaki (AUTH); Rossano Albatici and Bruno Zanon (UNITN) and Naama Teschner (BGU).  The meeting lasted for an hour approximately. As proposed by the Coordinator and seconded by the Project Officer, members debated an agreed schedule and pending tasks proposed in the last SCM in Lisbon such as key terms for a Project’s glossary, WP Methodological Reports, protocols and the preparation of an expert list for a Follow-up questionnaire were discussed. Also, it was arranged that the Project Mid-Term meeting will be held in Malaga in October and a next secondment reassignment. Besides, it was noticed that two notes introducing the Project were produced recently and sent to an academic journal and a specialized web. USE suggested establishing a wider network related to Renewable Energy and Renewable Energy Landscapes. Related to online atlas, it was discussed only eventual changes and it is fully operational currently. To sum up, it can be told it was quite fruitful, satisfying and nice meeting.

Due to the extraordinary circumstances resulted from the Covid-19 Pandemic, the organizers of the “5th Energy and Society Conference”, which was supposed to take place in the University of Trento on September this year, have decided to postpone this event. The new dates will be the 10-12 February 2021.

For further information about this event, please consult their website through the following link:

We will continue updating future changes regarding PEARLS arisen from this sanitary emergency.

Some of the cartographical tools and 3D Monitoring on REL developed by our team in Geosystems Hellas and the University of Seville are already uploaded to the Horizon 2020 Platform Result and available for the general public under consultation, but our consortium is still working on exploitable results that could be included in here. We will continue working on this matter and will let you know as soon as we have more results uploaded.

Call for the “International Geographic Congress”

In the upcoming August, the IGC will take place in Istanbul. Topics treated by the PEARLS Consortium will be addressed in the workshop “Sustainability Processes in the Low-carbon economy: Territories and Renewable Energies”

Deadline for submissions of abstracts:

13th of January (Link for Submissions)

More info about this call:

The University of Trento, one of the PEARLS Consortium participants, will host in September the fifth Conference on the social dimension of energy, aiming to exchange insightful ideas and to create opportunities for collaboration.

Through a wide variety of topics, interested participants are encouraged to present papers on different aspects of the Energy Transition treating its sociological aspects in different workshops/special sessions. Deadline for abstract submissions: 31st of January.

One of these workshops will be specially dedicated to Renewable Energy Landscapes, one of the main topics of our project.

More detailed info about this call:

Organised by the Smart Specialisation Platform, the objective of the workshop is to offer an overview on the how/why/who of Smart Grids in Europe, with the main aim of supporting national/regional authorities and key stakeholders across Europe in Planning and Designing  the allocation of their EU funds for supporting investments in smart grids R&I and deployment.

This last month, EnerCoop in association with others have launched an initiative to consolidate Crevillant as a “local energy community of reference”. The Electricity cooperative has presented the objectives of this singular initiative which aims to foment self-consumption among others. More info about this event: 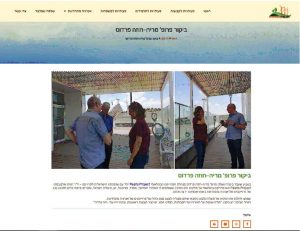 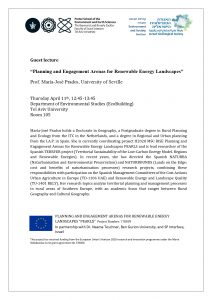 The Department of Environmental Studies at Tel-Aviv University has hosted a guest lecture given by María José Prados on April 11th. The lecture gave an introduction to the “Planning and Engagement Arenas for Renewable Energy LandscapeS” project to a group of international students.

The lecture was given during the first part of Ms. Prados’ secondment in Israel, in partnership with Daniel Madar and Hagitt Ulanovsky from SP Interface. 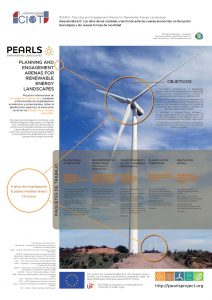 Doctoral Course on “Social Innovation and Renewable Energies: the use of participatory methods”. This November Dr. Ana Delicado will give a two-day Research Seminar at the University of Seville. 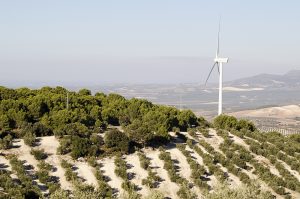 The US held the oficial launch of the international action PEARLS, Planning and Engagement Arenas for Renewable Energy Landscapes 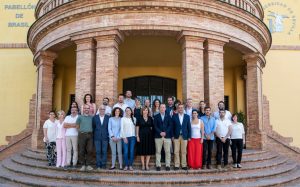